Honeycomb shelves are really cool. I’ve been mirin’ them from a far for quite some time. I had a sneaking suspicion when we lived in Ohio that we wouldn’t be there for very long. So strong were my suspicions that I felt discouraged to do a bunch of wall decor type projects. That and pure laziness. But since the wagons wheeled west and Uncle Christophe died of dysentery, I can’t be that naive boy you used to know and but still love. I have to make these things before it’s too late! For UC!

I want all my people to know how easy this is, so that they too can honeycomb it up. Honeycomb shelves are six pieces cut to the same length at 30 degree angles. That’s it! If you’re still discouraged, you need to man up. I can’t always be the lone contributor to your do it yourself fortitude! Eat some crust! Get some hair on your chest! Let’s DO THIS!

My truck can only fit 8 foot lengths of wood, which is 96″ when converted using advanced conversion methods. Now I wanted my honeys 8″ each, but that doesn’t leave any margin for error. Another thing you should know is that my DIY’s are full of errors, so a margin there must be. With that in mind, I dropped my honeys to 7″ each, giving me two full honeycombs from one 8 foot length. There are five honeycombs total, so we need two and a half 8 foot lengths. Gravy? Gravy.

Cut List:
30 – 7″ honeys @ 30 degrees each side (7″ on the longest part of the miter…see the pictures below for sweet clarification!)
This will make FIVE honeycombs.

Now that all of that very important information is out of the way, let us begin. Angle your miter saw (or miter box) to 30 degrees. With your finger off the trigger, bring your saw down to your piece about an inch from the edge. We want a nice clean cut on the end piece and need to make sure we don’t cut the angle short by cutting too close to the edge. Once the first piece is cut, FLIP the board over and measure 7″ from the tip of your cut. Mark it out. Again, with your finger off the trigger you crazy person, bring the saw down to your piece so you can make sure your blade is exactly to the left of your mark. What many people (such as myself) fail to remember is that the blade itself has a thickness to it, so when you make a cut it actually bites off more than you thought. This is why we won’t be cutting in the center of the mark, but just off to the left so we get our honey length to exactly 7″. Go ahead and make your cut. Label your pieces so that you can attach them end to end. This little trick will make your joints a lot cleaner. That’s a pro tip right there from your neighborhood unprofessional. Here’s the sequence: Measure, cut, flip, measure, cut…and so on. Get into a steady rhythm but don’t get sloppy! Take your time and respect the power tool.

It’s all about respect, in the end. UC told me that. Respect. Now that we’ve got our little honeys, let’s join them so they can comb together. Many of my colleagues choose screws for this application. A noble endeavor. But look where noble got UC! Using screws is going to be both time consuming and give you more opportunities to screw up. If screwing is your only option, you do what you do. There’s no wrong way to join our honeys. But if you have the capability…try this on for size… Finish nail gun. Grab 1-1/4″ nails and hit it 3 to a joint. If you don’t have a nail gun, ask your parents or your friends or your neighbors. If none of them have nail guns…well…you’re screwed(ing)! One of the problems you’re about to encounter is that the joint you’re screwing or nailing into PUSHES BACK when we go to attach them. Screwing is much more abrasive than using a nail gun…so if you do decide to go with screws, make sure you pre-drill first to avoid both cracking and MORE push back. But with Ricky’s unpatented-as-seen-on-tv clamp method, our honeys’ joints will be tight whether you gun or screw them. All with little to no kickback! Must be 18 years or older to call.

Use your free hands to push and pull the joint together as needed. We need tight, flush outside AND inside joints. Often times I would get the top of my joint flush on both sides, nail, then set the bottom with my free hand, nail and then nail the middle. Oh and don’t forget to glue your joints…I only glue the joint I’m working with at the moment so as to avoid getting glue all over EVERYTHING! Too much glue? Wipe the glue into a clean line like so. Glue both sides of your last honey… Gun the first side (seen clamped above), rotate the your honeys, then pull together and clamp the final joint. One honeycomb complete! Repeat this to make as many honeycombs as you’d like! If you want to check to make sure your honeycombs are square, take your tape measure and measure joint to joint. My joints are lining up between 12-1/8″ and 12-1/4″. Close enough! If you’re getting different measurements that are WAY off, your honeycomb may need to have a few honeys replaced. What went wrong? Well perhaps they weren’t exactly 7″ end to end. It’s hard to say for sure since you never call me anymore. Two is better than one! You can seriously never have too many honeycombs. Find a flat surface and pick a layout for your honeycombs. You may have realized that from three 8′ 1×6’s I could have made six honeycombs instead of five, but I think odd numbers work better for some designs. Six may have forced the layout to be more symmetrical, which may not have looked as good in my opinion. Use a pressure clamp and nail gun to attach the honeycombs. I put two nails on each side and one in the middle. Five total. Once again if you decided to use screws, you probably don’t need five screws to attach the two pieces. Three would probably suffice. I did my best to make sure the honeycombs were flat on the side I’ll be mounting to the wall (the bottom). If you do your best too, we’ll both have no regrets. Repeat the process for each honeycomb! AWWWW! Look at our little honeycombs standing all on their own!

Check out part two of my DIY Honeycomb Shelves guide where I’ll cleanup, stain, paint and hang. Come hang with me then! All of the cool kids are doing it! 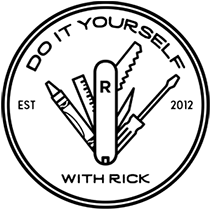